Will the Coronavirus Spark a Recession, a Depression or What? 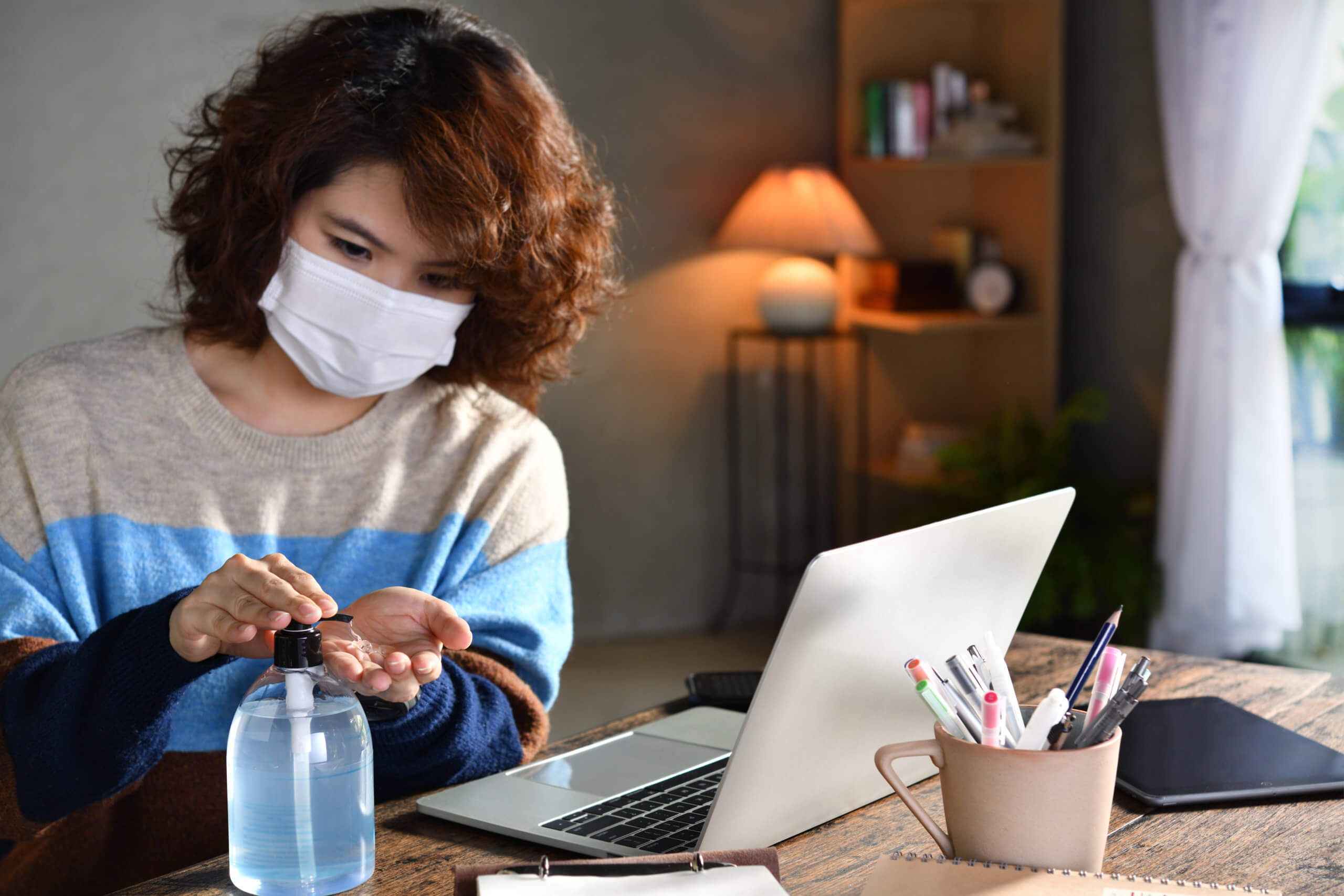 As the whole world reels from the economic, financial, health and social impacts of COVID-19, the forecasts for what will happen to the global and U.S. economies become ever more dire.  Unfortunately, no one can possibly know the true outcomes so all the numbers you hear and see are mostly speculation, usually based on some educated assumptions, but speculation, nonetheless. Econometric models are not very useful when they confront a previously unknown exogenous shock.

For most of the 2010-2019 period, nearly all the world’s economic growth was coming from China and the U.S. Europe has never recovered to its economic peak of March 2008 and the same is true for most of Africa and Latin America. Demographically challenged Japan, still the world’s third largest economy, has never gotten close to its 1989 peak.

The data we have for January and February document that the Chinese economy was in freefall from their draconian measures to try to stop the spread of the novel coronavirus. The evidence so far is that they largely succeeded and are now working diligently to get their economy up and running again.

Europe is mostly shut down with horrific data coming from Italy and only slightly less awful data from Spain and France, which have all seen more deaths than China, and with Spain not far behind it. The UK has been rocked by the news that both Prince Charles and Prime Minister Boris Johnson have tested positive for the virus.

The U.S. economy was humming along quite nicely in January and February, with employment at record levels and an unemployment rate in February of 3.5%, the lowest since November and December 1969. That made the Department of Labor’s March 26 announcement all the more breathtaking as it reported a number of jobless claims for the week ending March 21 that was five times higher than ever before.

We were still digesting the full gravity of that number when on April 2 the Department of Labor hit us with their report that an astonishingly high 6,648,000 people, seasonally adjusted, filed new initial claims in the week ending March 28.

The chart below clearly shows how that seasonally adjusted number is stunningly higher than the previous record of a revised 3,307,000 the week before and how each of those two weeks surpassed by huge factors the old record of 695,000 jobless claims for the week ending October 2, 1982. Most analysts expect similarly horrible (and unprecedented, which is an unnecessary word these days) numbers for the next few weeks. We’ve seen more people filing initial jobless claims in just two weeks than had been considered “normal “ for the preceding 10 years.

Also, on March 26 the Bureau of Economic Analysis (BEA) gave us the third estimate of GDP for the fourth quarter and full year 2019. Back in the good old days before COVID-19, real GDP (by seasonally adjusted annual rates) grew by 2.1% in both the third and fourth quarters of 2019 and 2.3% for the entire year. That was down slightly from the 2.9% rate of growth in 2018. It wasn’t spectacular, but it was decent growth.

Congress has now passed three pieces of legislation to alleviate the economic impact of the fight against COVID-19 on the US economy. On March 27, the House of Representatives passed HR 478, the “Coronavirus Aid, Relief, and Economic Security” (CARES) Act by a voice vote after the Senate passed it on a 96-0 vote on March 26.

The CARES Act appropriates some $2.1 trillion to ameliorate the hardships facing consumers and businesses. As a reference, nominal GDP (measured in current dollars) was $21.4 trillion in 2019. Real GDP, which is adjusted for price changes since 2012, was $19.1 trillion. That means that the CARES Act has applied an astounding 10% of GDP to the problem. On top of that, we have the unlimited stimulus from the Federal Reserve. That could be another $4 trillion or even more if necessary.

It is a much bigger stimulus than what Congress tried to fight the 2007-2009 recession. It is also designed much more efficiently than that one in order to get money into the hands of consumers and businesses very quickly. 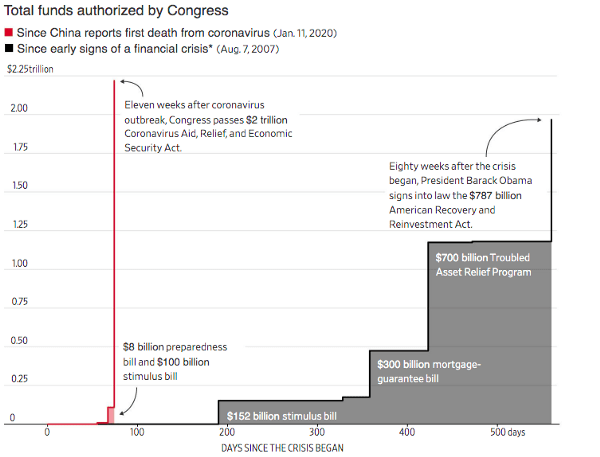 People who are unemployed will receive regular unemployment benefits plus an additional $600 a week for up to four months. That will result in paying tens of millions of people more than they were earning when they were working. As reported by the Federal Reserve in 2018, we know that 40% of U.S. households could not pay an unexpected bill of $400, so this infusion of cash from one or both of these programs should be very impactful for struggling households. However, it does set us up for a fascinating experiment in economics.

If people spend most of their income supplements on rent or mortgage payments, utilities, groceries, credit card debt, and other normal and continuing expenses and save the rest, there will be little impact on inflation. If they spend much of it on discretionary purchases (finally getting a new washing machine, a computer for the family or signing up for Netflix, for instance), we could see inflation rise dramatically.

Will U.S. See a Recession or a Depression?

We won’t get the first (“Advance”) estimate on first quarter 2020 real GDP from the BEA until April 29. Because January, February, and early March were so strong, it is entirely possible that real GDP growth will be positive. Even if it is negative, it won’t be a very big decline.

The really interesting data will be for the second quarter. We won’t get that release until July 30.

The estimates (more accurately, the “guesstimates”) are all over the map. The spending under the CARES Act is potentially so massive that we could easily see positive growth in nominal GDP for the second quarter. My good friend Michael Drury has laid out very clearly how that could happen.

If this turns out to be what happens, then the negative forecasts for real GDP (currently from -10 to -30% growth) will be far too pessimistic. You should understand these are annual rates, so the actual quarterly drop would be about one-quarter of those numbers. If inflation stays low, then real GDP could turn out positive. That would surprise almost everyone.

The really big “unknown unknown” is, of course, how long the severe policy of imposed limits on economic activity will last. That is a function of how well we manage to hold down the number of cases of COVID-19 in the U.S.

No one knows the answers to these two questions. If the U.S. follows the Chinese experience, we could see bars, restaurants, manufacturing plants and other currently closed places including retail stores reopen in June and July. That would contribute to very strong third and fourth quarter real GDP growth. That outcome could give us a positive growth rate for the entire year.

However, this is a very out-of-consensus forecast for now. It would also mean that the National Bureau of Economic Research (NBER) would eventually put out a release from its Business Cycle Dating Committee that there was no recession in 2020. That group determines the dates of recessions and expansions in the U.S. Recessions are characterized by the “three Ds” of depth, duration and dispersion. As noted, we could have a deep drop in the second quarter and still not fall into a recession.

The other side of the forecast spectrum is describing the scenario for a depression. What’s the difference between a recession and a depression? Our shortest recession ever was a six-month one from January to July 1980. If we have a drop that only lasts three or four months, the NBER will probably not think that’s long enough to qualify as a recession.

The only roughly comparable period to today in U.S. history is the Spanish flu pandemic of 1918-1919. That included a seven-month recession from August 1918 to March 1919. My friend Dr. Kevin Swift, Chief Economist of the American Chemistry Council, has calculated that the U.S. economy fell by 23.0% in real terms then. It was back to new record levels of output in nine months from the trough. Of course, that recession also coincided with the conversion of much of the economy from defense goods production for World War I back to a civilian economy.

If that pattern is what we wind up with in 2020, then the NBER will certainly call this a recession. It will end the record-setting expansion that began in June 2009.

We’ll have to wait for the BEA to do its annual revision in July 2021 to have a clear picture of what happened to real GDP during the COVID-19 pandemic. My expectation is that the U.S. economy will come through this at least as well as China has because we started from such a strong basis. Meanwhile, stay well and keep watching the data.

Why Roth Conversion Planning Is Important at Retirement

With higher marginal brackets a likely reality and the 2019 SECURE ACT’s elimination of the STRETCH IRA, annual income tax planning has become even more important. 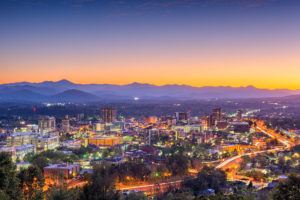 There Is Risk Everywhere – Keep Calm and Carry On

The events of the past two years should serve as good reminder to all of us that no matter what you do every day, we face risks beyond our control. However small the risk may be there is no way to ensure that you avoid falling victim to these types of events. Not that we should live our lives in constant fear – we should just prepare for the worst and then feel very fortunate should we end up living long and healthy lives. Read our Q4 2021 newsletter on leaving a legacy via strategic estate planning. We provide 10 articles with guidance on if you need an estate plan; types, features and taxation of trusts; how to set up trust funds for (grand)children; how to talk to your children about your estate; small-business transfer strategies; estate planning for the nontraditional family; how property titling can affect your estate plan. We also discuss what to do with your estate plan after getting a divorce or losing a loved one. We also introduce a new strategic alliance we formed with First Covenant Trust to offer our clients a full range of trust solutions.

If you are getting close to retirement age, this newsletter is for you. Parsec CEO Rick Manske explains how to save for education expenses in the face of retirement planning. Michael Baughman provides a 5-year countdown checklist, and Travis Boyer explains how to adjust your portfolio allocation ahead of retirement alongside a portfolio spending illustration. Nancy Blackman outlines eight steps to take ahead of retirement and Cristy Freeman suggests making a bucket list. Larry Harris writes about his experience turning 65 and Neal Nolan ponders what the day after retirement might feel like. We announce our 2021 Parsec Prize recipients and other company news. Enjoy!